Bern Cuthbertson was first introduced to the world of seafaring in 1937 when at the age of 13 he became his father’s deckhand on the trading ketch Weerutta.

This is where he began his training under sail in an older type sailing vessel with the rig, not unlike that of his Bass and Flinders re-enactment sloop Norfolk.

Owing to many vessels over a period of more than 50 years, including one he bought in England and sailed out to Tasmania, Bern retired in 1988 when he sold his prawn trawler working out of Coffs Harbour. 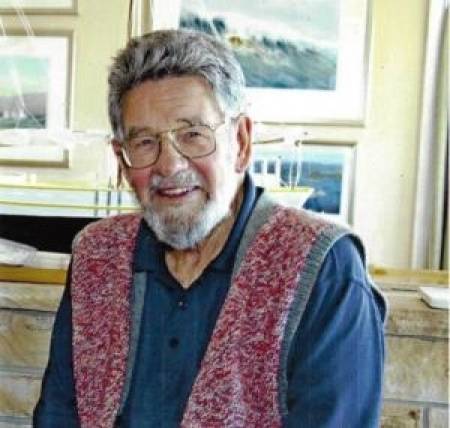 Returning to Tasmania, Bern renewed his interest in maritime history. Bern was the driving force in the construction of the replica Norfolk and the Elizabeth – leading the re-enactment of the voyage of George Bass and Matthew Flinders in 1798 which defined Tasmania as an island separate from mainland Australia.

With dedicated crew members, he has re-enacted significant voyages in recent years in the whaleboat Elizabeth

This was just the start and during the trip with his crew, Thomas O’Byrne, Craig Dixon, Rick McMahon, and Geoff Zwar, the Elizabeth faithfully followed in the steps of Kelly which included a trip into Port Dalrymple at the mouth of the Tamar River, and landed in George Town.

The voyage can be read about in detail in Bern’s book, “Around Tasmania in a whaleboat”.

In January the following year 1987, after the successful trip around Tasmania, the Elizabeth set sail from Cowes on Philip Island for Sydney with a crew of five.

This was the same date as George Bass some 189 years earlier, had set out on his whaleboat to return to Sydney after he and Flinders had discovered Bass Strait.

They have great staff 😉 cool place tho